Home » Take a trip back in time: metal roofing installation through history

Take a trip back in time: metal roofing installation through history

While metal roofing installation is popular worldwide, no country has taken to it quite as much as us!

Metal roofing is an iconic piece of Australiana – so much so that it was actually featured in the opening ceremony for the Sydney Olympics (who knew?!)

But how did metal roofing reach this point?

Take a trip back in time: metal roofing before the industrial age

Here’s a nifty little fact we stumbled on while crawling the web: did you know that the very first vending machines were invented almost 2000 years ago in ancient Greece?

We know, it caught us off guard too!

There are a lot of inventions and technologies out there with much longer histories than we might imagine. Another one of them is metal roofing.

Surprisingly, metal roofs actually go all the way back to ancient times – for example, when it was first constructed in 27CE the Pantheon in Rome featured copper plates on its iconic domed roof.

Metal roofing would pop up from time-to-time over the following centuries, such as in Kronborg Castle in Denmark (which classic literature fans might recognise as the castle in Hamlet).

The Industrial Revolution (and the creation of corrugated metal)

Luckily, that all changed with the Industrial Revolution.

It was with the invention of corrugated galvanised iron in 1828 in the UK that metal roofing really started taking off.

For those not in the know, corrugated metal (metal sheets with the wave-shaped surface) is much, much stronger than flat sheets. The shapes mean that the force from hailstones and the like are dispersed more evenly, reducing potential damage.

The effects of these two inventions were instant. All of a sudden, you had sheet metal structures popping up all over early Australia to make sheds, outhouses and quick housing for fresh settlers.

The Gold Rush was a boom time for Australia. In just a handful of short years, Victoria alone had tripled in population.

All these people making their way to the gold fields needed places to live.

And since many were coming here with naught but the clothes on their backs, this new housing needed to be cheap and easy to erect on their own.

This made corrugated metal the obvious choice.

And it isn’t hard to see why. Even back then, metal sheeting was:

Thanks to this, corrugated metal sheeting quickly became a staple in building projects all over the country.

And by the time of Federation, metal roofing installation was firmly established in Aussie homes. 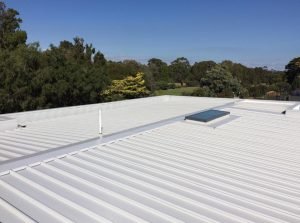 Developments in metal roofing since then

Despite the galvanisation process, it isn’t hard to find a pre-1960s metal roof that’s coated in rust or that’s had its coat of paint completely worn-off.

Interestingly enough though, you won’t find any modern metal roofs with the same problem.

That’s because since then, a lot of developments have been made in metal roofing. For example, over time iron was replaced with steel, which is harder and stronger.

Without a doubt however the biggest changes happened during the 1960s, when Bluescope Steel started changing up the composition of their steel roofing sheets, inventing a new way of bonding paint to galvanised metal sheets.

The resulting product came to be known as COLORBOND. And it quickly became a favourite in metal roofing installation.

Since then, COLORBOND has been improved with better metallurgy and improved coatings, designed to resist corrosion and rust.

We’re excited to see what else the future of metal roofing has to offer!

Metal roofing installation is (in our somewhat biased opinion) the best choice for roofing. It’s strong, long-lived, and cost-effective.

It took years and years of work to reach this point. Hopefully you now understand just how far we’ve come!

Thinking of metal roofing installation for your home or business? Watermaster Roofing is the team to call.

You can also visit us for metal roofing installation in Melbourne: pop into our office at Po Box 604 Black Rock 3193, if you prefer a more hands-on approach.

Book an onsite inspection or give us a call to discuss roofing problems or your next roofing project.